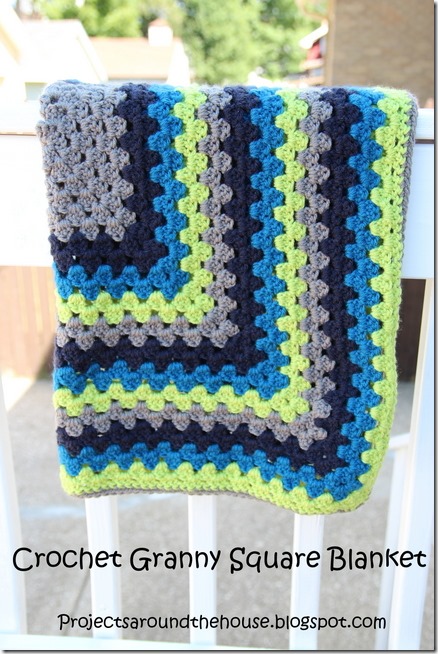 I actually completed a crochet project! It’s been way too long and it was really fun to get out my crochet hook again. Mike’s niece is having a baby in September and her shower was recently. I really wanted to make her a baby blanket but in my true fashion I started the project much later than I should. I had one week to be exact to get this blanket completely finished.
My first thought was to make a chevron baby blanket because that is my one my favorite patterns. The last time I made one though it took me two weeks of working my fingers to the bone and there just wasn’t enough time. I decided to go with this adorable granny square blanket from Daisy Cottage. I like it for two reasons, one I had seen it on another blog I love, Maybe Matilda and loved how it turned out. Two, it is square so I it would easy to stop when I ran out of time instead of being stuck with a strangely uneven rectangle.
This pattern turned out to be awesome since it worked up so quickly. It’s also super easy to make a granny square since it is just double crochet clusters. I opted to go with four colors to match a picture of the color scheme for the room. I ended up using Aqua in Vanna’s Choice, Navy in Vanna’s Choice, Radiant Lime in Vanna’s Choice and Pewter in Red Heart with Love. I already had the navy and grey at home so I only had to get two new colors. I could have gone with all Vanna’s Choice but I was trying to avoid buying more yarn and use some from my stash. I ended up needing one skin of navy, two of radiant lime and two of aqua and one of the grey. The grey skein was much larger than the other colors so if I had used Vanna’s choice I would have needed two.
I should have measured the size but I didn’t think about it until just now. I did have a little helper who thought this was a mighty fine “blankie” so you can kind of get an idea of how big it turned out. (He cried when I wouldn’t let him lay on the blanket when I was trying to take a picture.) 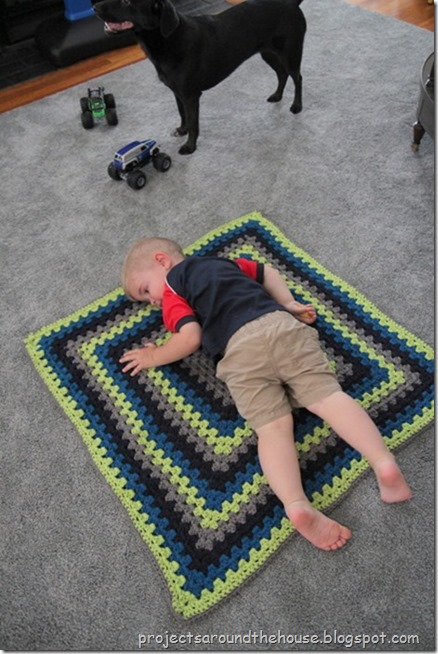 I love how this color combination turned out and since I still have quite a bit of the yarn leftover maybe it will end up as a new hat. I won’t get ahead of myself though because this was a major feat to get something crocheted with a 20 month running around. I had a slight delay in the middle of crocheting to unravel a giant knot because Lincoln still thinks playing with a skein of yarn is too much fun. 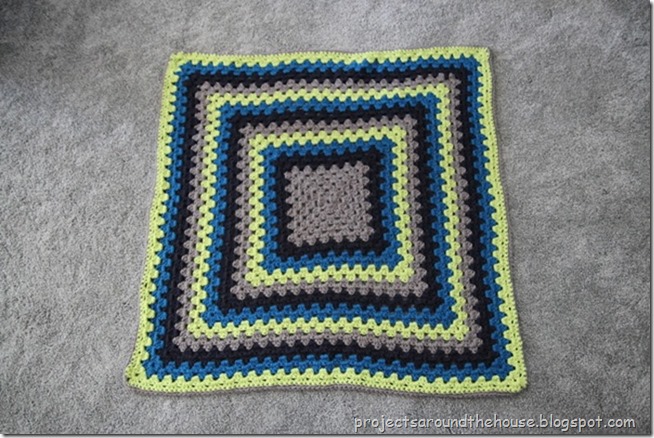 « June and July Garden Blooms
How to Update a Headboard »