I have a couple of crochet projects going on right now and I’m starting to feel a little scattered, especially since I just want to keep start new ones and leaving the others unfinished. I am a small issue though, about 2 and 1/2 feet tall to be more specific, that hinders me from finishing these projects more quickly.

This is what I’m dealing with people. 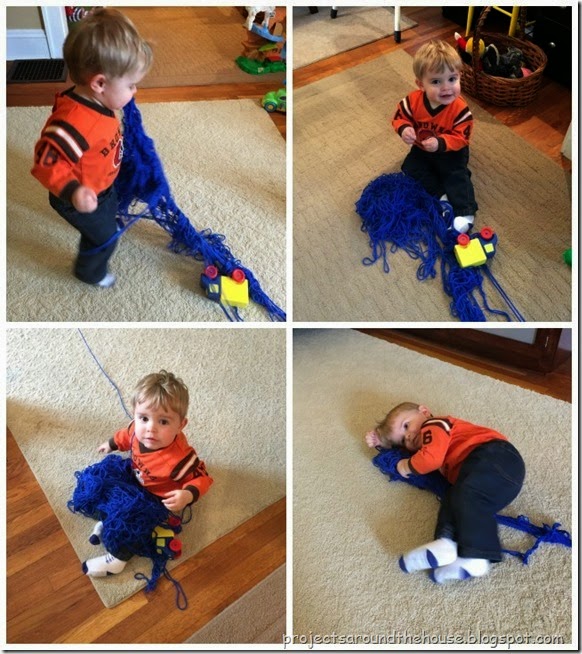 Lincoln is pretty obsessed with my yarn and will take any chance he can get to unravel a ball or skein of yarn, shake, drag and roll around in it. It’s pretty funny until I’m spending several days trying to work out the rats nest he created. I’ve almost got that blue skein of yarn workable again. Mike told me to throw it out and start over but I find something strangely therapeutic about undoing knots.

Anyway, I really am working on some projects. I made Lincoln a mohawk hat but I only put a half mohawk on it and I decided I like a full mohawk better so I want to add that extra piece. Then I really do want to share it and the pattern I used because I made it myself after not finding exactly what I wanted online.

I’m also working on some adorable ear warmers for my friend and her daughter. I bought the pattern from Velvet Acorn, even though I was pretty sure I could recreate it on my own, I decided to see how she made it. Her patterns are viral on Pinterest and I even had this one on my own board. I have to say I found the pattern to be mildly confusing and I’ve ended up having to modify it so I wasn’t 100% thrilled with it. It is still a cute pattern so I need to hurry up and just get that project done already.

I’m also working on a scarf for a gift. I don’t want to share too much about this one but I’m using wool yarn on it and I’ve never really worked with wool before. I keep going back and forth on whether I really like it or not. I’m good portion of the way into it so really I feel like I can’t turn back now. Mike says it looks good so I am going to push through and finish it up so I can move along to something new.