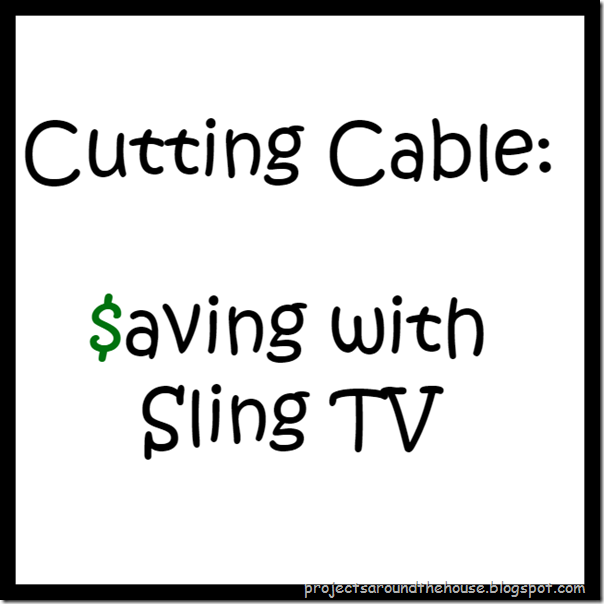 I wrote a post back in 2012 about how we cut our cable bill by converting to internet TV. Since that post we have continued to watch shows through Hulu, Netflix and have added Amazon Prime to the mix because we got the membership for the two day shipping. I recently discovered a new option to watch tv on the internet called Sling TV. I’ve seen some reviews on it online but I felt like I needed to share my own opinion.

Let me first say I am writing this review completely on my own and was not compensated for it. I feel pretty strongly about the money savings we have enjoyed by not paying a cable bill but it is definitely a sacrifice since there are many shows we can’t watch through the options we have. When I first heard about Sling TV and told Mike about he took about two seconds to say we should try it. Sling TV is by Dish Network and it’s an internet TV service that offers several cable channels that include ESPN, ESPN 2, HGTV, AMC, Food Network, TNT, TBS, Cartoon Network, CNN, Disney Channel, ABC Family, Travel Channel, Adult Swim, DIY Network, Cartoon Network and a few more.

The three channels that really swayed us were ESPN, HGTV and AMC. We already were buying the full season of the Walking Dead from Amazon and this would offer us another way to watch it in addition to getting the other channels. The cost for Sling TV is $20 a month and right now they are offering a deal to get a free Fire TV stick or Roku stick or 50% off a Fire TV or Roku box for prepaying for three months. We got the free Roku stick since we already have a Roku and are familiar with the interface. I felt like it was a good deal because I looked at it as getting three free months of Sling TV by paying for a Roku stick we were already considering buying.

Here’s the pros. It’s pretty awesome to have HGTV again. Mike and I have binged watched it on many occasions. I am in love with Chip and Joanna Gaines from Fixer Upper and may move to Waco Texas just so they can design my house. Mike watches ESPN every second he can get. We are very pleased with the channel selection and find ourselves watching it probably 50% of our tv watching time.

Here’s the cons. By adding an extra $20 a month to our other bills of $7.99 for Hulu, $8.53 for Netflix and $50 for internet is getting us a lot closer to a full cable bill. It’s still a big savings because when we originally switched we were saving $80 a month. I don’t count Amazon Prime in this because I would keep that subscription even if I didn’t get the free shows but it is a cost of $99 a year or $8.25 a month.

The Sling TV interface kind of sucks. If you watch on the computer, the app you have to install is almost unusable. The shows kept freezing and if the show restarts you can’t fast forward to get back to the place you left off. The Roku app is a lot more stable but neither option has a very good search functionality to be able to find shows. The main functionality requires you to navigate to a channel and then scroll through previous shows if you want to watch them. Not all channels even have this functionality and some of them just allow you to start watching whatever is playing right now. Another downfall is that you can only watch on one device at a time.

Despite the cons I am pretty sure this TV option is here to stay for now. We may decide to cancel in the future but right now I need my HGTV fix and Mike needs his ESPN. We may burnout on those channels but right now I’m not sure how we lived without them. We moan and groan over the quirks of the interface but I have hopes that it gets improved one day. That being said, if you already have cable and want to switch you would probably not put up with this service. But if you have been deprived from these shows for years like us then you will put up with the quirkiness to have a chance to watch some previously not easily attainable cable shows.