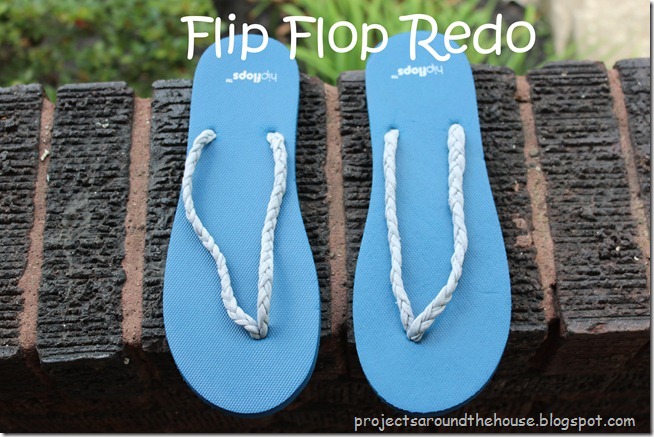 I’m sharing another Pinterest inspired project with you today. I am really excited about this one! (I think I’m starting to say that a lot.) I have been wanting to do a project like this since last summer. That’s actually when I bought these flip flops. I bought another pair too but that’s another project for another day. They were only 99 cents at a local discount/grocery store. I knew I wanted to remake them but I wasn’t sure what I wanted to do with them yet so they sat in my refashion pile until today.

I was browsing my Pinterest board and looking at all my flip flop redo pins. There are a lot of great ideas out there! It was hard to decide but I knew I wanted to cut off the plastic part because it was really uncomfortable so that helped to narrow it down. I decided to use this redo from Ashley at Make It Love It. She is so super talented at sewing and I love her tutorials. This one seemed like it would be really comfy but I did modify it a little bit. She used a five strand braid and I was too lazy to figure it out so I went with a traditional braid instead.

Here’s what these lovelies started out as 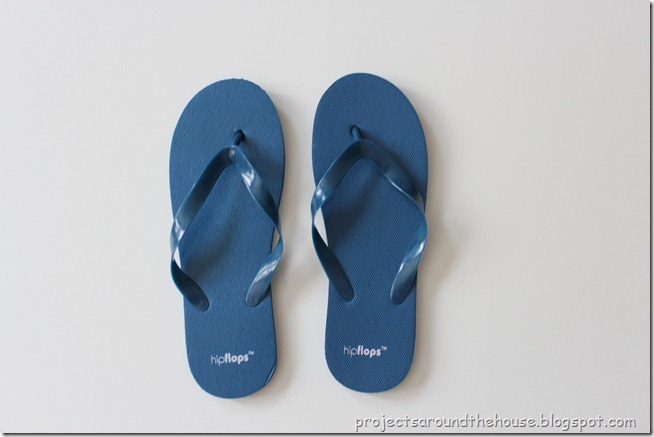 Yesterday Mike gave me a pile of shirts he didn’t want anymore because I told him he was not allowed to throw them away (the things I can make with old t shirts!) I picked out this gray shirt that he used to work out in. It had a couple of stains so I thought it would be perfect to chop up. 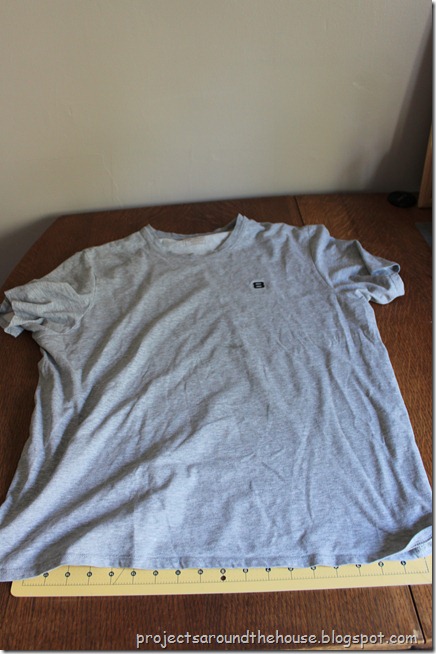 I cut three strips off of the bottom of the shirt. I was roughly trying to cut 1/2 inch but some how one of them was much thinner than the other two. After I cut the strips I stretched them out so they wouldn’t stretch as much when I used them for the flip flop straps. 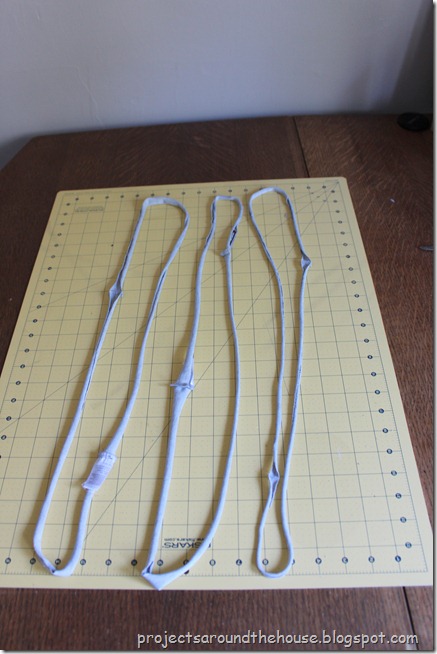 I cut one of the seams off to make it a long strip and I sewed the three pieces together at one end with my sewing machine. I realize now it might have been easier to cut the strips in half again so I had two sets- one for each strap. I didn’t know how much I was going to need but one side of the shirt ended up being long enough.

Next I braided the strip with a regular braid. I used my sewing machine foot to hold the end for me while I braided. I ended up liking how the strands were unevenly cut so it was a happy accident. 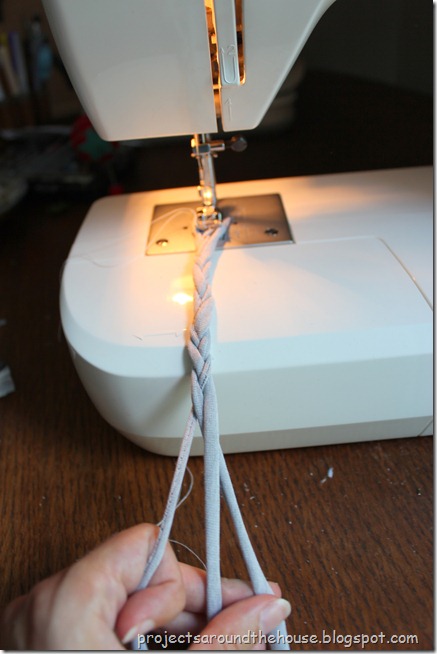 When I was done braiding, I sewed the end of the braid to keep it together.
Here’s the finished braid in all its glory. 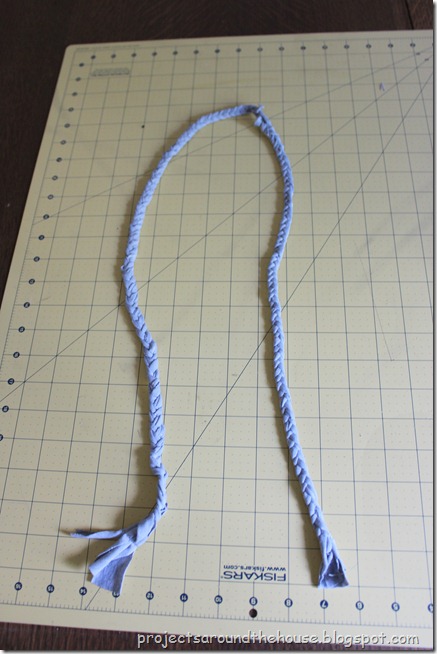 Then I found the middle of one half of the braid. I folded the braid in half there and shoved it through the toe hole and tied a knot. I tried to make it as tight and small as possible.

In order to make the knot fit better I had to cut away some of the bottom of the shoe. This was actually the hardest part of the whole project. I recommend cutting before knotting, which I didn’t do on the first knot. Use a sharp pair of scissors and expand the hole but don’t go through the shoe. This helps the knot to rest better. The two holes at the back of the foot don’t need to be as large as the front because there will only be a single stranded knot there and the front is a double stranded knot.

You can see in my pic I started cutting the back bottom hole but not the back top one yet. 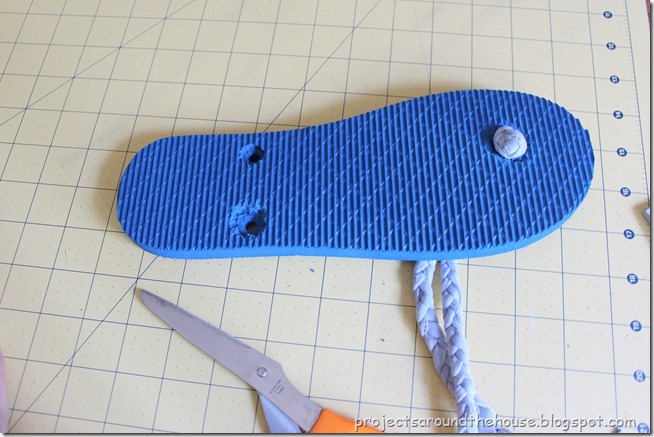 After your holes are cut and the front knot is in then pull each strand through the holes in the back of the shoe and make a knot. Then trim the excess strand.

I tried the shoe on so I would know how tight I wanted the straps to be. The straps are knit so there are really stretchy I tightened them with that thought in mind. 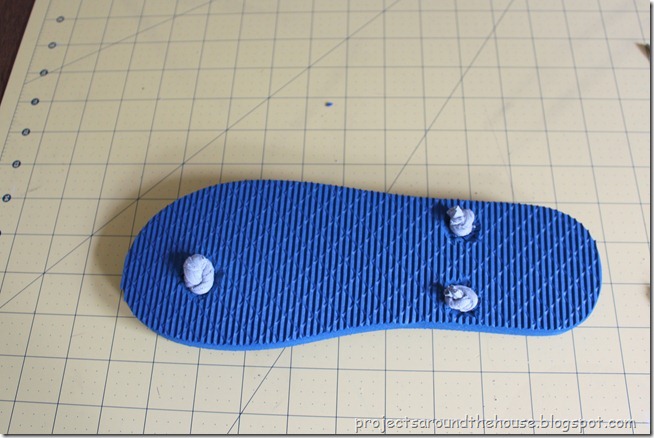 Repeat the same with the other side. To really secure the knots I used some hot glue around of the bottom of them. 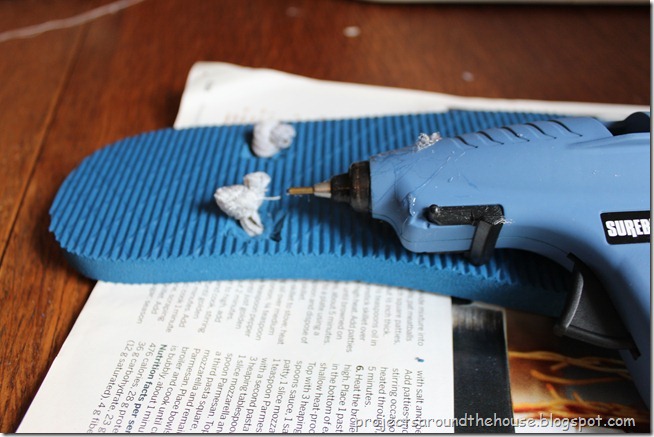 I hope you don’t mind a picture of my unpainted toenails. I’m giving them a break from polish this year and I feel funny showing them but I can’t really show you the flip flop in action without them. 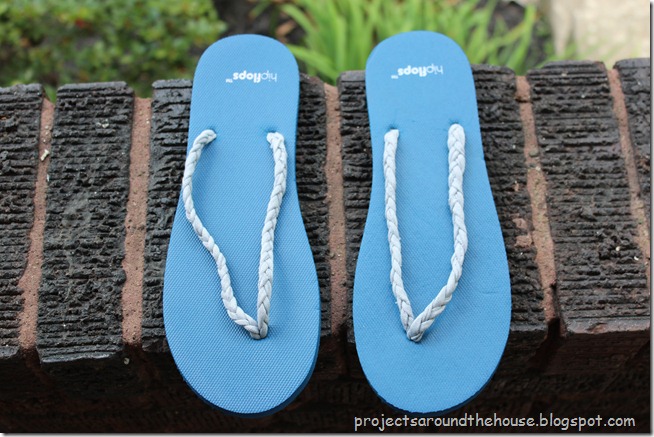 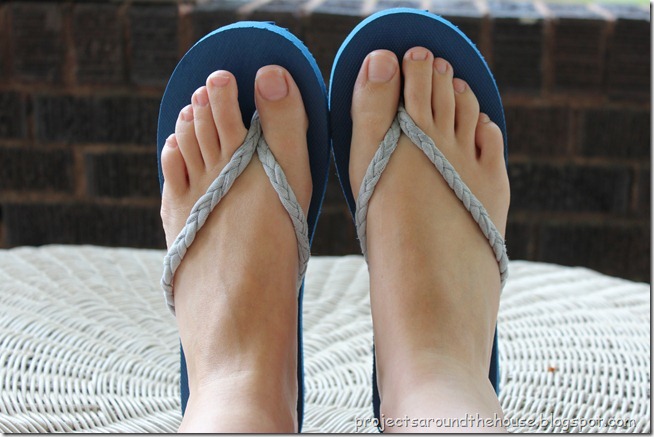 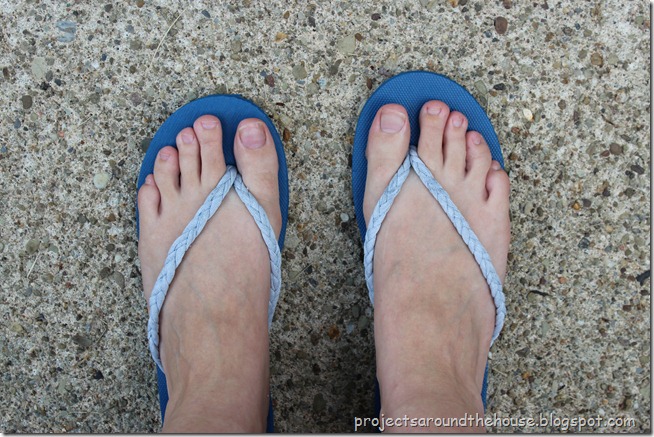