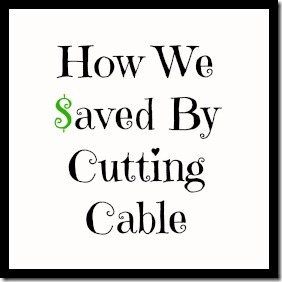 How we saved by cutting cable

As a internet TV convert, I want to share my story with you about how we got rid of cable. This may not be the right choice for everyone but Mike and I have been watching TV without cable for almost a year and we are very happy with our decision.

How we got started:

Our journey started last Christmas. We got a VIZIO blue ray player for Christmas that had internet apps. We decided to try out Hulu Plus and Netflix with a free trial. The first thing we realized was in order to be able to stream TV we had to increase our internet speed. We increased our to 18 mbps and haven’t had any issues since. I think we started out with only 3 mbps.

After we got our internet speed in order we learned that the VIZIO internet apps were terrible. They were super slow and there was something wrong with the interface for Hulu so we started using our Wii to watch TV (Xbox also works for this.)

Next, we took a trip to Best Buy and bought an antenna to pick up the network channels. We got some advice from the guy at Best Buy and bought the kind of antenna that goes on the outside of the house and Mike installed it on the back of our house. He used our old cable wire to connect the antenna to our TVs. Now we were getting network channels for free. There were surprisingly a lot of channels that came in. Some of them we had never heard of but there was some semi-decent programming.

We were happy with the way our Wii and free network channels were working out so we bit the bullet and canceled the cable. We made sure to watch all of the shows we had built up on the DVR before we did this and it was a little bit scary but we found we were already finding lots of programming on Hulu and Netflix.

After watching shows on Hulu and Netflix for a couple of months, we talked about how we wanted to buy a computer to hook up to the TV we could get an HDMI connection and be able to watch more shows on Hulu. Then we realized we had a desktop computer that we rarely used sitting in our upstairs bedroom. It was easy to hookup to the TV and it had an HDMI cable connection to make the picture look much better. We bought a new remote to use instead of the keyboard and mouse and we were in business.

The last step in our journey was getting a Roku box for our upstairs TV. This little device has internet apps on it and allows you to watch Hulu, Netflix and other channels on it. It works really well and we have been really pleased with it.

The ways we watch our shows:

Network TV. Good old fashioned network TV is where we watch the news and the occasional football game. We pick up a good array of channels that come in handy on a lazy Saturday or Sunday morning.

Netflix has whole seasons of TV shows and movies. The TV shows are usually 1-2 seasons behind what’s on the air currently. When we get into a new show we can watch the whole season in a week or two depending on how many episodes there are. We discovered tons of great shows on here that we never saw before. Our latest favorite is Revenge. That show is so addicting we are watching it non stop.

Hulu has shows that are currently airing on TV and movies. Some of the TV shows have expiration dates so you only have a month or two to watch them before they expire. There are some shows that have older seasons available to watch too. Not all shows are on Hulu though. Most shows from CBS aren’t available to watch and some shows are only available if you watch through your computer but not on devices like the Wii or Xbox. The other downside to Hulu is that you have to watch commercials. It’s  not as many as watching regular TV but it can get annoying. This is still the best way to keep up to date on the current shows that are airing without having to watch them on their regularly scheduled night.

Amazon is our third viewing option. If you have an Amazon Prime account you get access to certain shows for free or you can pay per episode for other shows. We don’t have an Amazon Prime account, but we have considered it. What we did do was to buy a season of The Walking Dead. Mike found this show on Netflix and got me hooked on it too. He didn’t want to wait for the next season to show up on Netflix so we bought the season from Amazon for around $25. I didn’t buy the HD version because it was a dollar more an episode. This was a special occasion thing since I don’t see myself purchasing other shows when we have so much available to watch already. Try a Amazon Prime Free Trial for for 30-Days

The biggest downfalls of not having cable:

There is no ESPN or cable new channels like MSNBC, CNN or Fox. If you need either one of these then you probably don’t want to switch. There is also no Bravo, E! or HGTV. There are some shows we don’t get from FX and CBS. Update: ESPN and HGTV are available through Sling TV. See my review of that here.

Despite these downfalls there are so many other great shows to watch. We have lost some of our old favorites but picked up new ones that we never would have watched with cable.

We are internet TV converts!

The greatest part of having internet TV is that we save $80 a month on our bill. We pay $7.99 a month for Hulu and $7.99 for Netflix plus our internet bill. The savings has the greatest motivator for us to have an alternative way of watching TV. Plus it’s pretty cool when your friends come over and think you are high tech because your computer is hooked up to your TV.