I freaking love this kid. Just like any mother does but really he is the best. We are up to 16 months and although he doesn’t change as quickly as he did in the first year, there are still new things he learns every month that never cease to amaze me.

Lincoln has recently become obsessed with animal noises. He only knows “moo” and he thinks it’s what a pig says but it’s pretty adorable. We have been reading his stories with farm animals and I make all the noises for him. He will pick up his book and say “moo, moo, moo.” He also picks up his toy pig and says “moo.” And we saw a different toy pig at the store the other day and he started mooing. I’ve been working hard to switch the mooing over to an oink but he also thinks all dogs and cats are “Abby” so we probably have a way to go lol.

His favorite in the house is still our dog Abby. It’s the first thing he says when he wakes up and when we come home from being out. One day last week it was almost the only thing he said all day. He says lots of daddies and mommies too. He know what stuff belongs to Mike and will pick it up and start calling daddy. When he wants something then it’s all about the mommies. When he sees food or some other object he wants then it’s “mommy, mommy, mommy!” We were at the grocery store in the produce aisle the other day and he got excited and started yelling “mommy” because he wanted some fruit. We ate at the Mexican restaurant the other day and I gave him cheese dip on a chip. He licked it all off and then said “mommy.”  So I gave him some more. He licked it off. “Mommy!” And we repeated that until we ate all the dip.

And now on to some of the cutest pictures ever. There was local photographer taking mini session photos for spring/Easter at one of my favorite local second hand stores. Of course I signed up because she was also going to have an Easter bunny. We went and bought Lincoln the most adorable outfit ever. He was a little nervous but did pretty well because there were Easter eggs everywhere and he loved them. 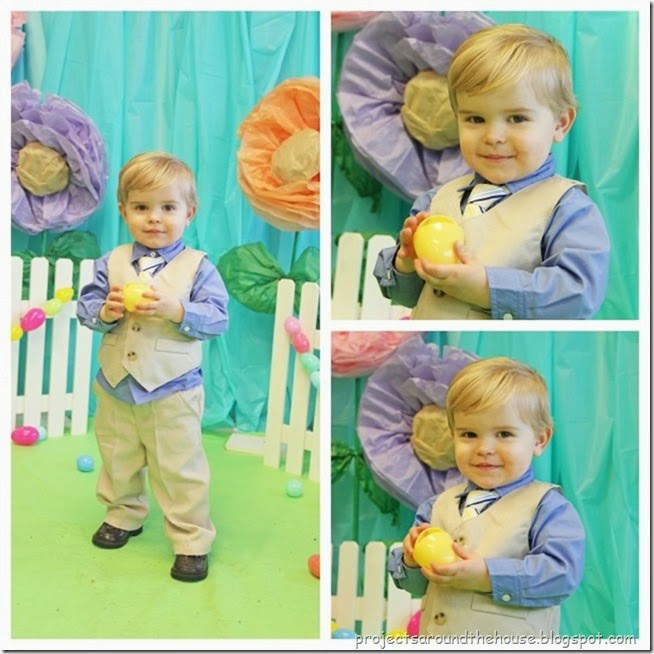 Then we moved over to the Easter Bunny set. We had come a little early and walked around and Lincoln was very interested in the Easter Bunny. As soon as I set him down next to the Easter Bunny he had a freak out. He cried and wanted me to pick him up. I know crying kids pictures with holiday characters are hilarious but my poor mommy heart melted and I couldn’t let him be upset. I finally convinced him to sit on my lap and leaned out of the picture. The photographer was a miracle worker and with a little Photoshop magic actually got a decent picture with the Easter bunny in the background. So here’s my Easter picture of my little man who is afraid of strangers (and bunny costumes.) Hopefully next year won’t be quite as traumatizing haha. 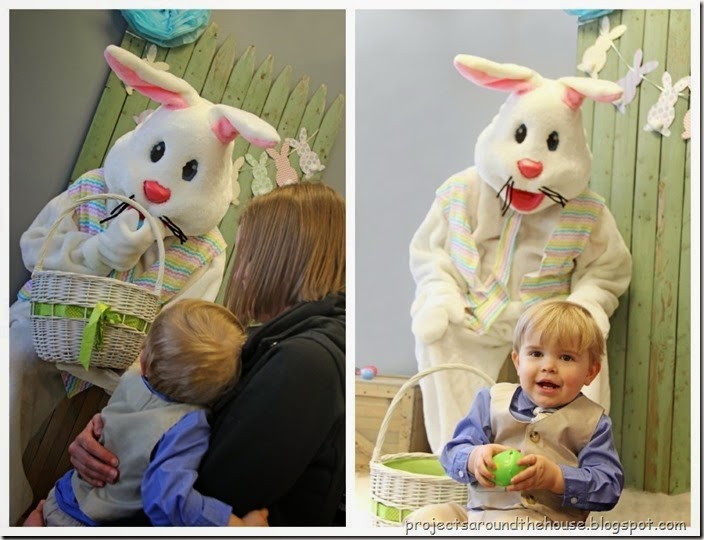