I thought when Lincoln started crawling and standing up that he was becoming a handful but now that he is an experienced mover he is ten times more of a handful. Our little adventurer is really into everything now and loves exploring every nook and cranny of our house. Mike installed a gate at the top of our stairs last weekend and it was really in the nick of time. I had started to have to run after him to snatch him away from the edge of the steps as he peered down. The gate really saves my sanity. I do tend to close the door in whichever room we are in upstairs otherwise he ends up in the bathroom (his favorite upstairs room) pulling all the toiletries out of my drawer.
Speaking of gates, we need to figure out some situation for the bottom of our stairs. Lincoln learned that he could crawl up more than one or two steps at a time and now can quickly and easily crawl up all the stairs. Our stairs have two at the bottom, then a landing and a turn before the rest of the stairs. There is not an easy way to gate off the bottom without having a least one step still exposed so I was looking at ridiculous (and expensive) configurable gate solutions on Amazon to try and find some solution. TBD on what we are going to do. This baby proofing stuff is exhausting.
The other thing high on the baby proofing list is a way to get the TV out of his reach. He loves to bang on it and then laugh. No matter how sternly we try and say “no” he still thinks it is hilarious and will continue to bang until we pull him away and try to distract him with another task. Wall mounts are also being researched on Amazon at our house.
Lincoln’s standing and walking is improving almost daily. He can stand on his own for an increasing amount of time. He did the first time on his own, then Mike and I would test him to see if he could do it. The other night he was sitting on the step and Mike watched him stand him and attempt to take a step forward. We bought him a fisher price push puppy toy and Mike set him up and gave him a little push and he started walking with it. He’s getting really good at it although I’m not sure we should be encouraging the walking because we are taking the trouble to a whole new level lol.
I got out some yarn and my crochet hook to whip him up some hats for winter and I almost forgot how to crochet. I had to start over on a hat I worked on for 45 minutes because I messed up the second round. Then I decided to try a hat on him I had made and was too big last winter to see if it fits now. He immediately wanted to rip it off his head. I am going to have to create some long ties to tie his new hats on his head. I have a feeling we are going to have a battle all winter long 🙂 I love this crazy stage he is in now but I actually had a tiny longing for the newborn stage when I could dress him in any hat I pleased and it stayed on his head.
I really don’t miss that newborn stage though. He is so much more fun now. I love watching him grow and learn new stuff all the time. He is so sweet and loves to give cuddles when he is tired, when I pick him up from his sitter’s or when he is nervous in a new situation. He loves playing with his best puppy friend Abby, playing with his toys, and playing with all the non toys like the computer mouse, coasters, the bread pan in the kitchen cabinet, shoes, cell phones etc.
Usually the non toys are more interesting than his real toys and Abby’s toys are the absolute best. He is partial to balls, cars, stacking cups and anything that lights up and plays music. Oh and he loves his books. He is very good at turning the pages and loves to help me turn them even if I haven’t finished reading the page. His touch and feel and flap books are his favorites right now. We read them every night before bed.
That’s what the boy has been up to lately, now on to some pictures. 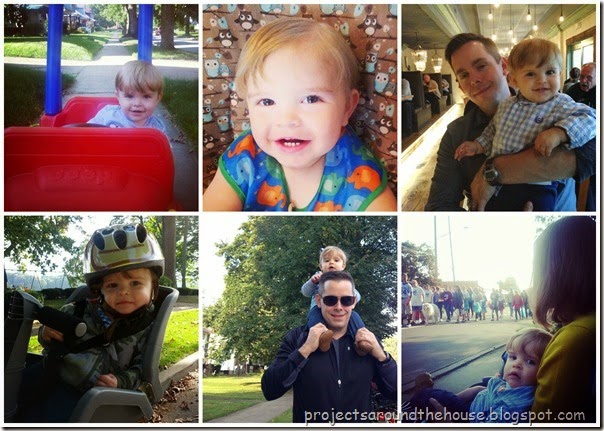