I’m rolling Lincoln’s 17 month update up with a post about our recent trip to Atlanta to visit Mike’s niece Heather, her husband Kevin and their son Landon (who is five months older than Lincoln.) Lincoln learned so much from his trip it seemed fitting to share them together.

We took our first airplane ride with Lincoln and he did really well. He definitely got antsy but we gave him lots of snack and watched Old McDonald on the Kindle about a billion times. He just loves that silly video from a kids app I downloaded. On the way back he was a little more wiggly but I’m not sure if that was because it was early or there was a man sitting next to us and we trying not to bother him. 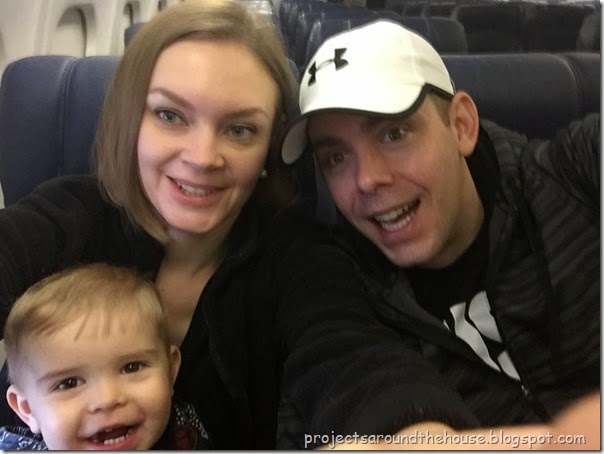 The first day in Atlanta we took it easy and the kids played with Landon’s electric car, the water table and ate popsicles. Mike grilled dinner and it was such a beautiful relaxing day. Lincoln was in love with Landon’s toys and quickly figured out where they were located and claimed his favorites. 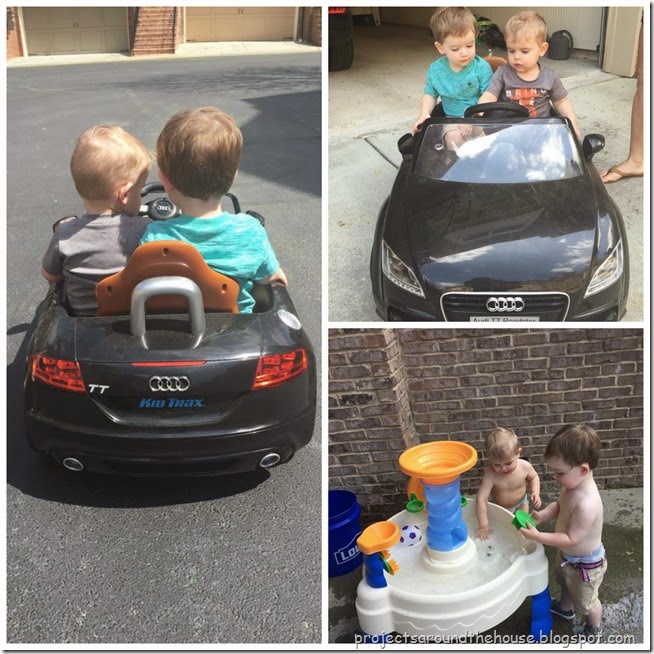 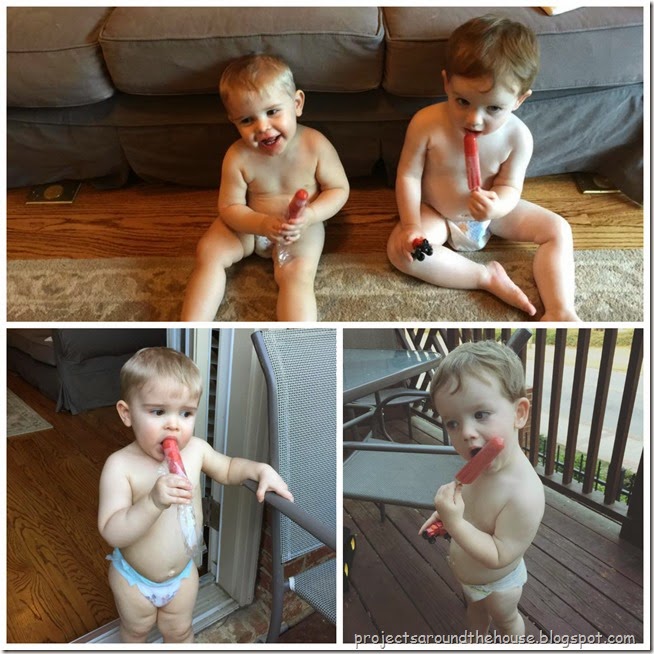 The next day we went to a completely overcrowded zoo but the boys had a great time (even if the parents were a bit overwhelmed by the crowd!) We ate lunch in a huge covered area and there was a pack of kids running around. Lincoln had to be a part of it all and he really started to come out of his shell. I feel like we have been so cooped up this winter he hasn’t got to experience what it’s like to run around and be a kid outside.

After the zoo and naps the kids took another turn on the water table and we had another yummy grilled meal. Lincoln also became especially fond of Landon’s Y bike and it had to be his favorite toy. He also loved running out onto the back deck and playing outside. 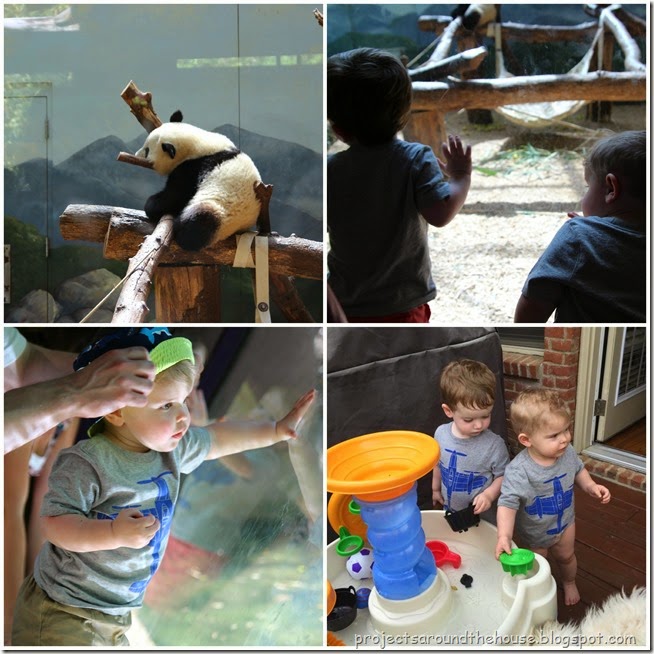 Day three was a trip to the aquarium. It was pretty spectacular and I definitely enjoyed it the most. Lincoln felt a little discombobulated by the thicker walled sea tanks but started to get interested in the jellyfish and the river fish tanks. He also came home with a stuffed penguin which I let him hold and he wouldn’t let go. He held on to that thing for dear life so we had to get it 🙂 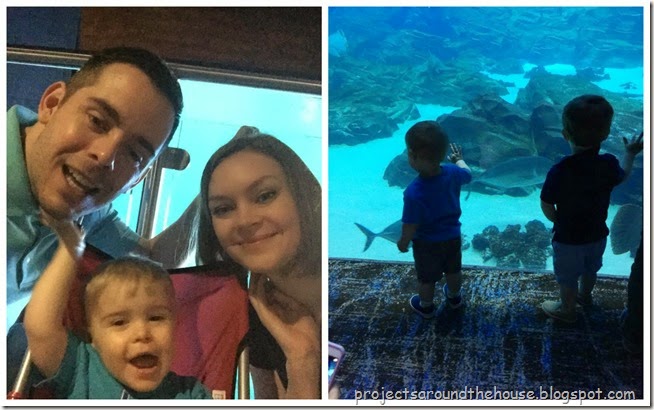 It was raining when we got home so Lincoln and Landon played in the puddles out in the driveway. They were too funny and both had a blast. Lincoln was unsure about it at first but was stomping around by the end. That night it was yummy pizza for dinner. Lincoln killed a piece of pizza so clearly he enjoyed it. 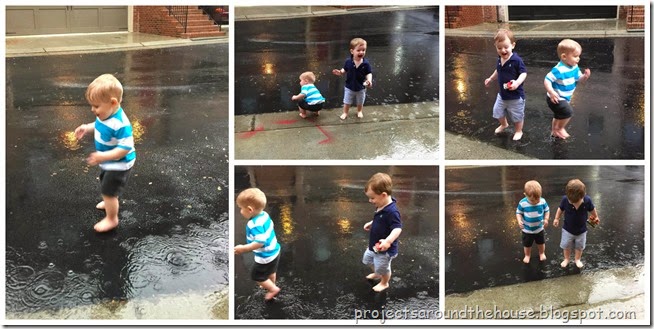 The last day we were there we went to an art show at Piedmont Park. It was another busy event and because of the rain the day before it got a little muddy so we headed back to the house and played with the water table again. Then we went out for froyo. Landon is a froyo eating champ and felt compelled to sample from our container. Lincoln practiced eating with a spoon and did really well. We also bought him a Jelly Cat stuffed animal which is brand of super soft toys. Landon had a bunch and Lincoln fell in love so he picked himself out a rabbit to take home. Now he calls the penguin and bunny his babies and carries them around the house and loves to lay on them.

After the kids were in bed, we had a sitter come stay with the boys so we could have parents night out. We went to a really yummy restaurant called Wisteria and had an amazing dinner and dessert. 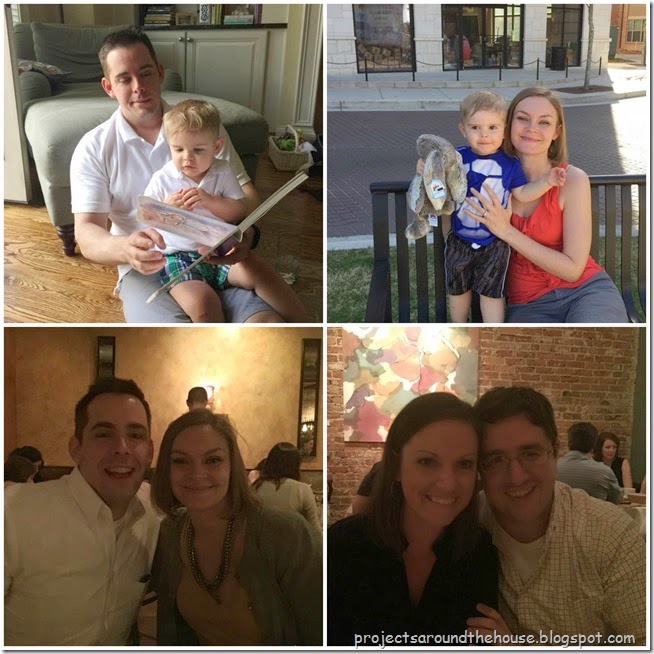 So that was out trip. We had the best time visiting and it was nice to stay with family we don’t see often and also understand what its like to have a toddler. The cousins played really well together. There were a couple of slaps and a bit of jealousy but what else would you expect from one year olds? It was really good for Lincoln to get out of his comfort zone. It has been hard to go out with such a cold winter so it felt great to be out in the world. We even came home to spring weather and the bulbs are blooming everywhere.

Other things Lincoln has been doing the past month: He is getting really silly. He laughs at himself and does silly stuff like smooshing his face in the back door. He loves to run and be chased. He loves being outside and playing on the deck or taking a walk down the sidewalk. He loves his books. They seem to be the thing that entertains him the most lately. He loves to take a pile and flip through all the pages of every book.

He has started saying lots more words too. New words he says are outside, water, please, mine, cookie and Spot (like the dog in his book.) He is starting to ask for more things too. His latest is “outside?” “cheese?” and “water?”

He still loves to eat but has been getting a little more finicky. Sometimes he will eat something all up and then the next day he wants nothing to do with it. He is starting to like spicier and more flavorful food a lot. He also loves to feed himself anything out of a bag or cup. Sometimes he doesn’t want something until it goes in a cup and then suddenly he is interested in it. He has taken a liking to nuts and even ate wasabi almonds because Mike was eating them the other day.

We are looking forward to the warmer weather that is finally here. We are planning on having tons of fun with our silly and sweet little boy.

« Vegetable Garden Plans
How to Start Vegetable and Herbs From Seed »