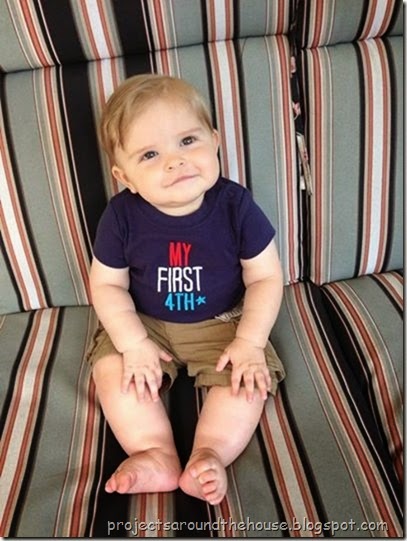 We celebrated Lincoln’s first fourth of July by going to a bbq at his gram’s house. Mike cooked up some sausages and we ate tons of yummy food. Lincoln fit into his festive onesie (yeah) and kept it reasonable clean for at least half the day. Then I switched him into a equally festive blue, white and red shirt.

We opted not to watch any fireworks because we weren’t sure how Lincoln would feel about the loud noises. Plus fireworks don’t go up until way past his bedtime and our sweet boy turns into a gremlin if he’s up too late 🙂 Maybe we’ll try next year.

On Sunday we went for a walk in the Metro Parks and stopped at a local farm called Szalay’s. They have a produce market and on the weekends they have open a couple of food stands. Mike and I ate salmon burgers, Lincoln got some of the bun and then we shared an ice cream fruit sundae. Lincoln got a taste and went crazy for it. He wasn’t so sure about the cold sensation since he doesn’t like cold food but he sure did love the taste. He ended up snatching the spoon away from me and wouldn’t let go of it until I pried it out of his hands when we were leaving.

Lincoln’s exciting skill for the weekend was learning how to crawl. He’s not up on his knees yet but he pulls himself forward with his arms while pushing himself with his toes. He’s been working on it for about a week but he really mastered it over the weekend and let me say that Mike and I are in big trouble! Lincoln’s new favorite things are cords, drawers, cabinet doors, cords and cords. Did I mention cords? He has pretty much found all the cords in our living room and he knows where they are now. If you turn your back for one second he is on his way to seek out the cords.

The bowl of dog water was also a recent discovery. He has a great time splashing all the water out of it and looking at himself in the reflection of the metal bowl. Mike and I just watched and laughed. Abby watched him with a puzzled look on her face.

Looks like we have some baby proofing to do! 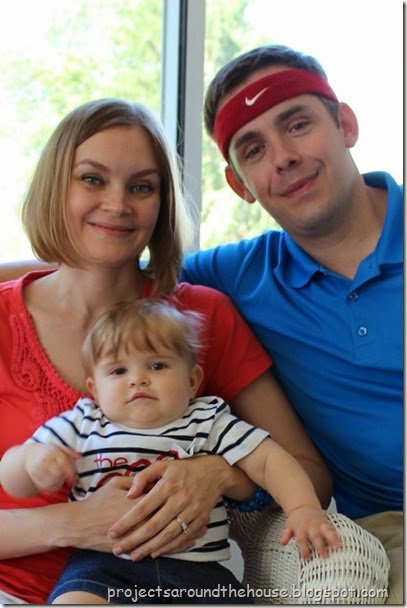