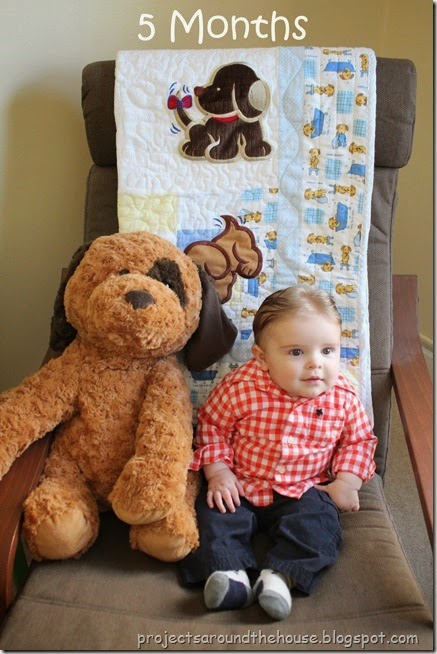 Lincoln is five months old now. He is changing so fast that he has learned all kinds of new stuff from the time I thought about what to write for this post and now that I’m actually writing it. He is almost 20 pounds now and wearing mostly nine month clothes. He still fits into a few six month things but he is already outgrowing some nine month stuff too. He is not a tiny baby anymore and sometimes I feel like he gets bigger overnight.

This picture is fresh after his bath so his hair looks very tame but it’s getting really long and is almost in his eyes. I think we are going to need his first haircut soon! It’s growing in blond too so it keep getting lighter and lighter. Speaking of baths, we moved his baby tub from on top of the kitchen sink to inside of the bathroom tub and he has not been liking it. We are slowly getting him used to it because he does love bath time…just not in the bathroom. He likes to kick his feet against the end of the tub and he loves having the water poured on his belly.

He is starting to be able to sit up better on his own and just turned into “Mr. Grabby Hands.” He is reaching for everything now and had gotten good at picking up smaller items like his toys and pacifier. Everything goes straight into his mouth too so he can chew on it. That’s partly due to the fact that he is teething and just got his first tooth, followed up by his second tooth a couple of days later. It’s the front two and they are tiny little white nubs right now. He has been fairly good with teething and has only been a little bit cranky at night.

He is starting to scoot around on the floor which is really fun. He is a little inch worm and will smoosh his face in the ground and then stick his but up in the air and push off with his feet to move forward. Then he makes a lot of grunts to show all the effort he is putting into it. He can also turn around in a circle by pushing off with his legs and moving his arms around. He is just starting to roll from belly to back. He has long since mastered the back to belly and prefers to be on his belly trying to learn to move around.

We are looking forward to starting solids next. We bought some rice cereal to try out first. We’ve already been practicing drinking water out of a cup because he started reaching for it. He will take a sip and then make a face like he was expecting something else. It’s pretty funny.

He is really such a sweet happy little baby and he is always smiling. He has an adorable laugh and Mike gets it out of him the most. He loves his daddy so much. He lights up when Mike comes in the room. I love watching the two of them together. We are so lucky to have him and every month he gets to be more fun than the last one. I can’t wait to see what he learns next. 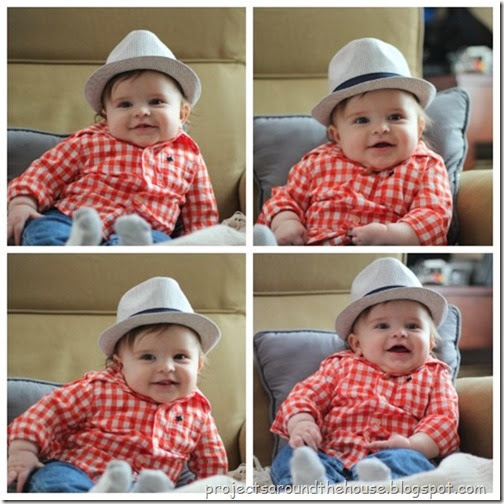 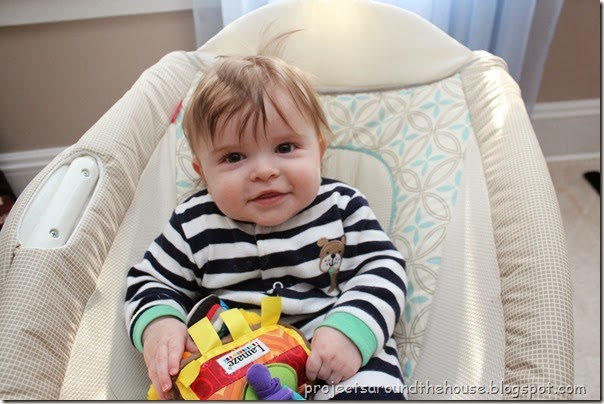