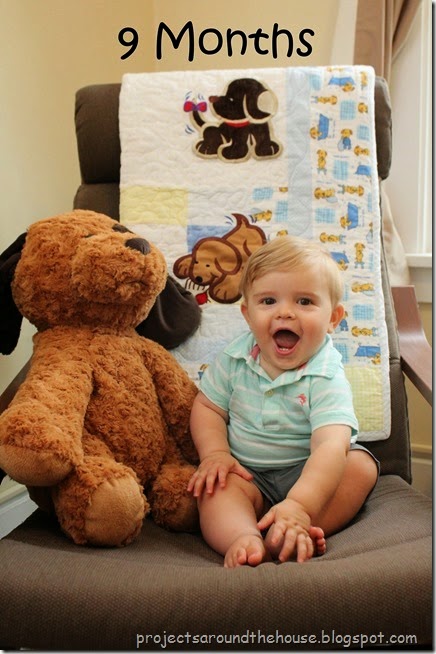 Lincoln’s nine month birthday was last Thursday and I’m finally getting this post up 🙂 This guy keeps me busy! We had a great day Saturday at the zoo. He’s still not that interested in the animals but had a great time riding in the stroller and hanging out with some friends. We also went out for breakfast this past weekend and he is a breakfast lover! He was gobbling up the omelet and hash browns like there was no tomorrow.

Speaking of eating, this boy loves to eat. He has gotten really good at finger foods and loves vegetables, fruit and meat. Broccoli and strawberries are two current favorites right now. We also introduced Puffs (aka baby crack) and he couldn’t get enough. They are not something we eat every day though because he will just keep asking for more. We are still feeding him the pureed pouches because they are so convenient and he loves him. He holds the pouch and sucks it down and sometimes cries when it’s gone. I have been on the lookout for good deals because they are not cheap. Whenever I get some coupons or see a sale then I stock up.

Lincoln is up to eight teeth now. We are getting into a good routine of brushing at night. I swish the toothbrush in his mouth and then he takes a turn. He actually does a little hand turn that’s really cute like he knows what to do. I think he is mainly enjoying the dab of baby toothpaste I put on the brush.

I can’t give an update without talking about Lincoln’s non stop movement. He has been “army” crawling for a while and now is finally figuring out how to crawl on his knees. Whenever we get excited about it though he will grin and drop back to his belly. He is still pulling up on everything and trying to cruise along whatever he can hold on to. Standing up all the time also means falling a lot so he’s taken a few tumbles but mostly pops back up like nothing happened. He loves to go into whichever room I am not in. If I’m working in the kitchen, then the living room is more interesting. If we’re sitting in the living room, then the dining room is calling his name. There is no slowing this kid down.

We are getting lots of da das and ma mas and ba, which he seems to be associating with ball. When he wants something then he makes an “eh” sound. Whether it’s more food, or a book or a toy he’s pretty good at telling us what’s he’s interested in.

Generally he’s the happiest, sweetest baby. He loves daddy, mommy, and his puppy Abby. He sleeps good. He’s loves to laugh (especially at Mike.) He loves to take walks and play with his toys. We are very lucky to have such a darling boy and every stage has been more fun than the next. It’s hard to believe in less than three months he will be a year old.

« Into Everything
Zucchini Summer »