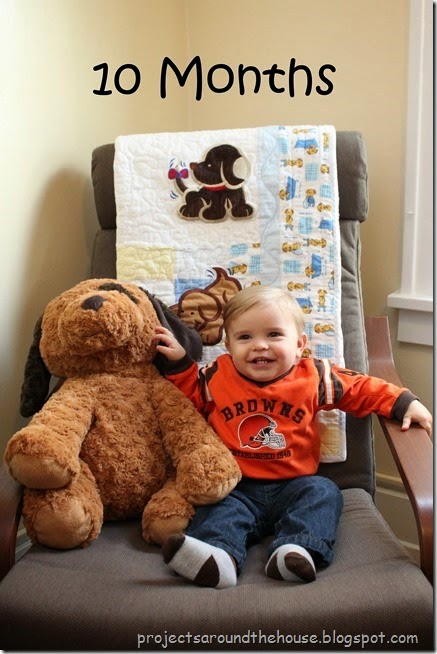 Where does the time go? Lincoln is ten months old and it’s hard to remember what life was like before him. Just two month to go before he will be one. This boy is non stop go go go. He has gotten really good at crawling on his knees and he is so fast. Sometimes he goes into “turbo” mode when he sees something he wants or is trying to escape. If I turn my head for two seconds he will be in the other room.

Lincoln and Abby have developed the cutest relationship. They just started playing really well with each other. Lincoln will pick up Abby’s toy and then Abby will snatch it away from him. Then Lincoln will grab another toy, Abby will snatch it and the game keeps on going. He thinks it is hilarious and will laugh and laugh at her. Sometimes he will carry her toys around in his mouth like he is a little puppy dog. It always makes Mike and I always laugh so hard because he looks so silly.

That leads in to Lincoln’s new word. He knew mama, dada and ball but now he says Abby too. At first we weren’t sure if he was actually saying it but now he says it all the time. He sure does love his puppy dog 🙂

He is still such a good eater. He just puts the food away like a bottomless pit. Any kind of meat is at the top of his favorites list. Broccoli, nectarines, strawberries, grapes are some of the others but he will eat pretty much anything we give him. He especially loves to beg off of us when we are eating a snack.  He is nursing four times a day (or taking a pumped bottle when I’m at work.) We are so close to a year my goal is to continue to nurse until then. He gets really distracted now so it’s challenging but we’ve made it this far so two more months is not that much longer.

Generally he is the sweetest little boy but he has started to get a bit of an attitude when he doesn’t get his way now. If we pull him away from something he shouldn’t be in to he will give shrill shriek of displeasure. It usually passes pretty quickly and then he is back to his sunny self.

This months photo shoot was the most challenging yet because Lincoln figured out he can stand up in the chair. He was all over the place and I can’t even believe I got a decent picture at all. Of course he had to be decked out in his Brown’s gear in celebration of the home opener. Love this little cutie more than anything! 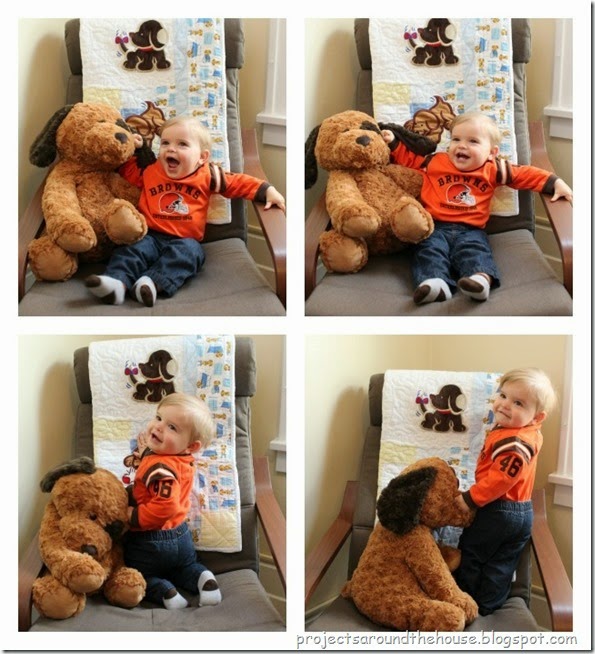