I can’t believe it’s already part way through August! Summer always goes by way too quickly. We are finally into tomato season in my veggie garden. My two big tomato plants have started producing like crazy. The jalapeno and Serrano pepper are also going crazy. This is always my favorite time in the veggie garden. The only kind of tomatoes I like to eat are the super ripe ones fresh from the garden.

I posted this pic on Facebook last week. This is what I picked out of the garden in one day. Two kinds of tomatoes, hot peppers, the cubanelle I finally picked since it started to turn red, green beans and carrots. I think I could have let a couple of the carrots stay a little longer. They are supposed to be a short variety for heavier soil. It’s actually the best they have ever done for me before. I have about double this amount of peppers now since I picked a whole bunch more. 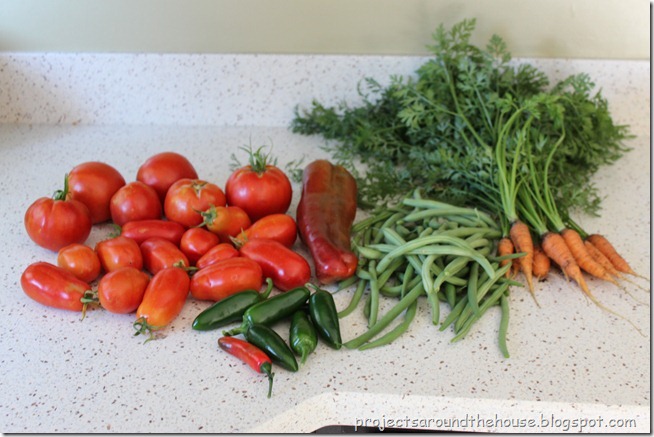 This is my bed with peppers, green beans and basil. The bush beans I have in this garden were almost done producing but I had to rip them out a little sooner than I wanted. My dog Abby discovered she loves to eat green beans and figured out how to rip the plants out, despite the fact that there is a fence up. The other bed with green beans was starting to produce and some of the plants were growing through the fence. Once she got a taste for the green beans it was all over! She ripped almost all the plants out and was eating the beans and stalks. I nearly had a heart attack! After she decimated the other bed she figured out there were green beans in this one too so I just ripped them out. They were starting to die out anyway and I didn’t want her to think she could eat them anymore.

She also stole an onion that was drying in the garage and ate the entire thing. I found out from a friend that dog’s shouldn’t eat onions but it was a few days ago and she seems to be doing fine. I feel like I need to build a fortress around my veggie garden to keep her out. She is such a little veggie lover I am beginning to think she needs some daily veggies in her diet. 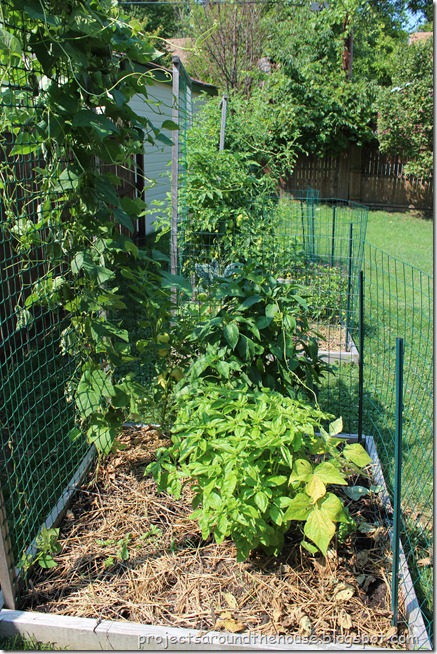 My gypsy pepper is finally starting to do really well. These peppers were supposed to be sweet but they are actually a mild hot pepper. They are really good in salsa. 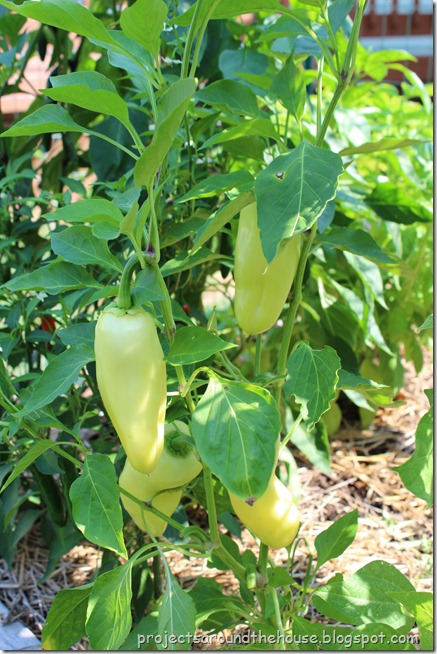 The serranos are producing like crazy. I have been trying to wait until they turn red but I actually picked a whole bunch off of here right after I took the picture. I am thinking about dehydrating or pickling them. 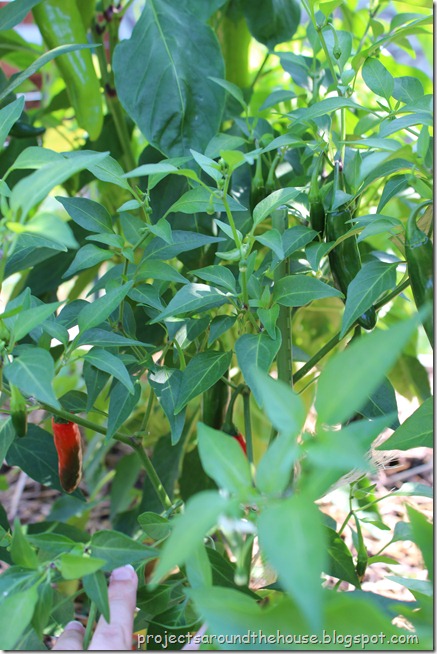 This is the cubanelle. I picked the huge pepper off of here and there are quite a few other little ones on the plant. 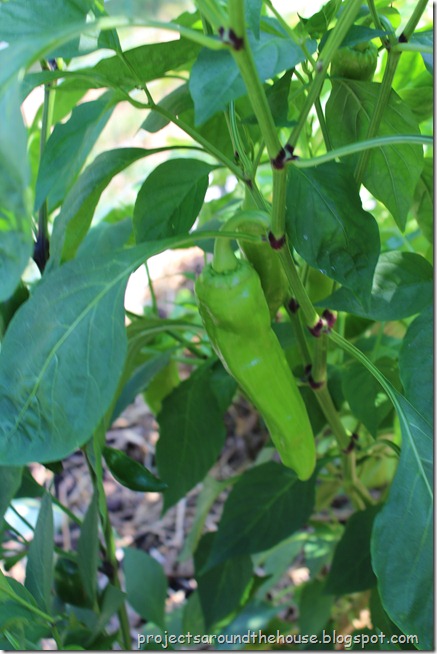 Here are my pole green beans. They are really starting to take over the trellis but they aren’t producing anything yet. I hoping they start soon since I won’t be getting much more off of my bush beans. 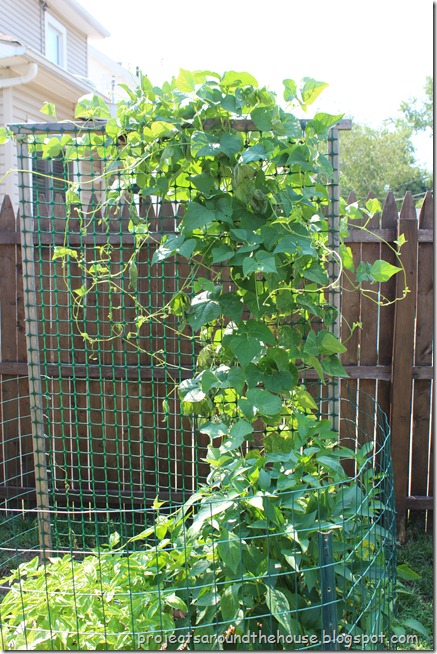 My roma tomato is producing like crazy. I need to figure out what we are going to do with all the tomatoes. We have been eating tomato, basil and mozzarella salad but we aren’t eating them up fast enough. I think I might need to make some tomato sauce. 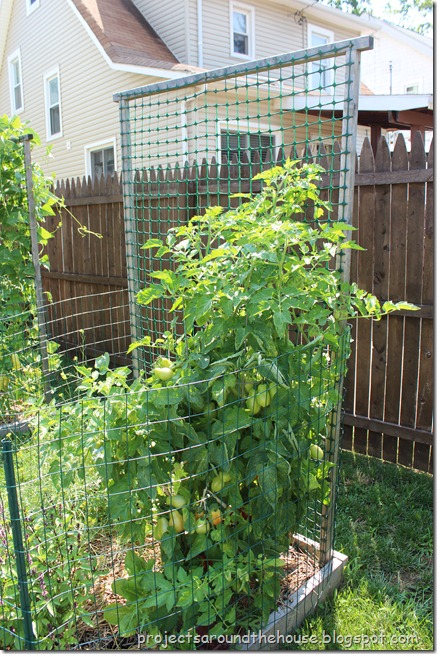 Here’s my better boy tomato. This guy is getting enormous! It doesn’t produce as many tomatoes as the roma but they are about twice the size and the flavor is better. This is the bed where I had a great crop of eight bush bean plants and now I’m down to too after Abby did her work on it. I’m hoping she doesn’t figure out how to get to them. 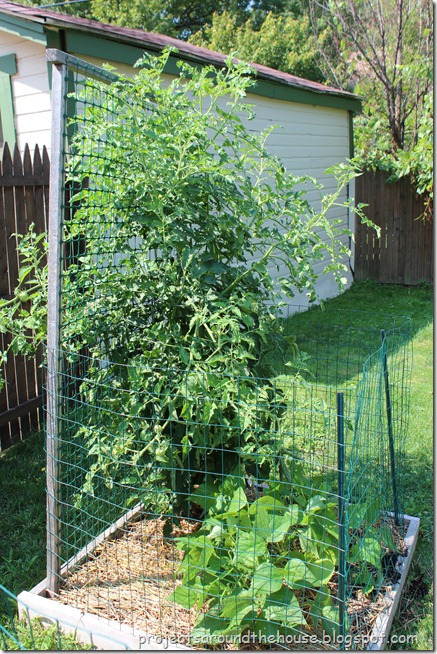 And last but not least is my topsy turvy. Compared to the other two giant tomato plants, this guy looks pretty sad. I grew this type of tomato, a sungold, last year and it was almost as big as the better boy is right now. Despite the fact that it’s so small, I don’t really mind. It’s producing tomatoes and this is my snack tomato plant. When I go to check on the garden I eat the ripe tomatoes while I’m checking on everything else. I grew three big tomato plants last year and it was hard to keep up with everything they produced. I am working hard to keep up with watering this one but it still has some yellowing leaves on it.

My opinion of the topsy turvy is that it’s good when you don’t have a place to plant a tomato in the ground but it will not get as big or produce as much as a tomato in the ground. It makes the most sense for the type of tomatoes that aren’t supposed to get very big. I’m still on the fence about using it again next year but it’s working out for me right now. I’m not completely overwhelmed with tomatoes and I still get to enjoy a third tomato variety. 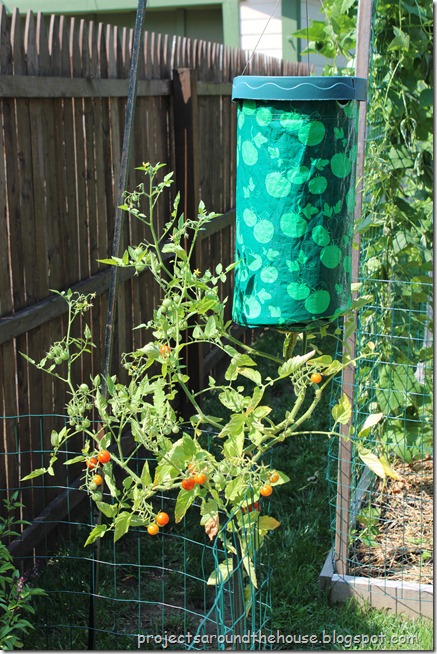