Oh man it was a crazy week last week. I’ll start off an a high note. I went to an amazing and inspiring conference for work on Thursday last week. It was all about women in leadership and I learned so much. I really appreciate how the company I work for now takes the time to reinvest in the employees by holding events like this. It was a great day until I came home…
I got home a little bit early and almost made a stop for some mommy time at the store but seeing my boy won out. When I picked him up at the sitter’s she said he had slept for six hours and had been cranky and pulling at his ears. This was after Mike had said the same thing the night before when I was at the gym and my mom had also commented that he was tired and pulling at his ears. The pediatrician was still open and I drove right over. Luckily there was no ear infection but little explanation for the tiredness and fussiness, until the pediatrician noticed that Lincoln’s was getting his eye teeth. This would explain pretty much all his symptoms, plus he is still getting over his cold. I gave him a dose of Tylenol for the pain and he was pretty good the next day. Until Friday night…
We went to dinner and Lincoln starting fussing, then we made a stop at Kohl’s and he cried. The. Entire. Time. We were “those parents.” You know, the one with the screaming kid that everyone is looking at and judging. Needless to say our trip to Kohl’s involved throwing a bunch of stuff in our cart and leaving much sooner than anticipated. He fell asleep on the way home. Then woke up and cried for a couple more hours until Mike finally got him to take a dose to Tylenol and he fell asleep around 11:00. Not a fun night.
Saturday involved more Tylenol but by Sunday he was back to his old cheerful self. And clearly happy that we decided to stay in most of the day. Only one tooth popped through so that means we have three more to go. Ugh.
Then Sunday night our oven broke. It had already been repaired once before so we decided it was just time to get a new and better one. So off to Lowe’s we went and bought an amazing five burner gas stove with convection heat and steam cleaning. I didn’t even know these features existed in stoves. It’s going to take two weeks to arrive so it will be cook top and grill cooking for us until then. I think we are both pretty exited to have this stove arrive though. We’ve never had a nice appliance before but we use our stove almost every single day so we wanted something better than the cheap bottom of the line one we had.
And our other news for the week has to do with out front yard. We have an amazing old tree out in front of our house in the tree lawn. It’s huge and clearly been there forever. Unfortunately it’s been slowly dying the past couple of years. Last summer about half the branches were dead. Mike has been worrying about it for some time and we’ve talked about getting it cut down. Cutting down huge trees is no joke. It’s insanely expensive so I’ve been dragging my feet on it. Well, Mike decided to call the City to take a look at the tree and they are going to cut it down for free and give us a replacement tree next year. I’m so relieved we don’t have to pay for the tree but I’m also so sad we are going to be losing all the privacy that tree offers us in the front yard. On the other hand, my front garden beds will gain a lot more sun so maybe I will have more luck growing the flowers I’ve always want to grow. I’m still going to miss that tree but it’s becoming a hazard and it’s better to get rid of it than have a huge branch come crashing down on our house or cars. 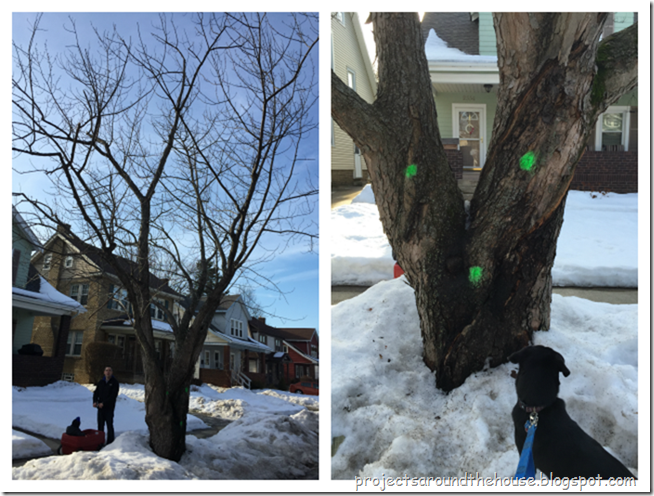 I’ll end on a high note too. The weather is finally, kind of warming up. We actually got to go on a walk outside! Lincoln loved his wagon and cried when we were done. We need a few more 40 degree + days and we might actually see the grass again. Spring is kind of, sort of getting here. We will probably get another snow storm or two but at least the end is near and it’s not a moment too soon. I think I speak for all of Northeast Ohio (and maybe all of the Midwest) when I say we are sick of winter. 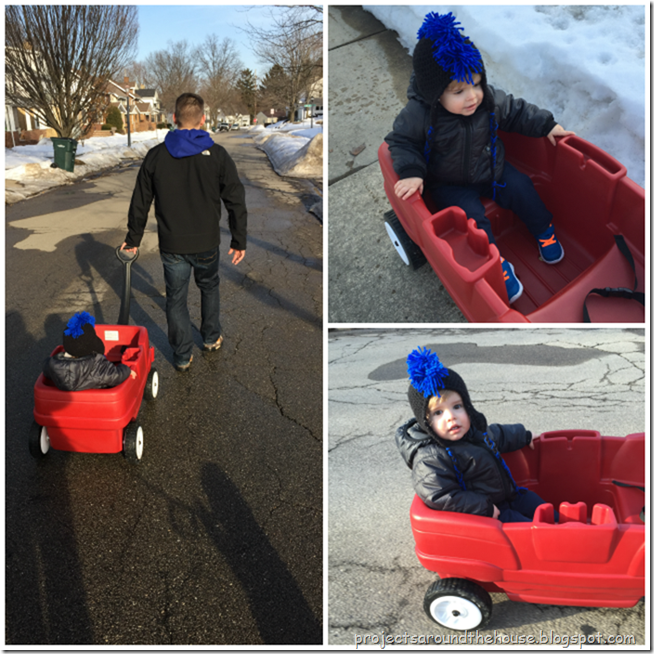